Another way of farming is possible: Focus on some innovative young organic farmers in the Mekong Region

In the framework of its work aiming at changing the negative narrative towards agriculture through innovative approach to attract the youth, ALiSEA launched a pilot research initiative to document some innovative farms, Assessing farm sustainability in the Mekong Region: from the concept to case studies.

This study took place between March and August 2018 and was led by Ms Eve Anna Sanner, ALiSEA Jr Researcher, in close collaboration with ALiSEA team across the Mekong Region and the Youth Farm Network (Y-Farm) in Vietnam and Kalyana Mitta Development Foundation (KMF) in Myanmar.

Youth is generally seen as having lost interest in farming in the Mekong region. Young people would not aspire anymore to be farmers, as such work would be associated with limited opportunities, little prestige, lack of independence and low returns (Sofie Mortensen, 2018). However, this common view on young people needs to be put in perspective. Agriculture is still a major working sector for the young population of the Mekong region: as an illustration, more than two thirds of young people in Cambodia are relying on agriculture for their livelihoods (OECD, 2018). Furthermore, the decline of the share of young people working in agriculture should not only be explained by a growing lack of interest of young generations for farming. Indeed, farmers are increasingly facing difficulties in the Mekong region – such as insecure farming livelihoods, land resources, decreasing environmental services – which limit the opportunities for young people to develop farming activities (Sofie Mortensen, 2018). The access to land for young people is made difficult by the demand for land of large scale companies for industrial agriculture or hydro power projects, which are taking away land from smallholders. According to a study on Laos, young people are forced to emigrate as lands are acquired for large economic development projects such as hydro power and large-scale mono-crop plantations (Barney, 2012). Other factors are limiting opportunities for young people to have secure livelihoods in farming, including climate change impacts, decreasing soil fertility, and declining environmental services driven by polluting agriculture practices, along with the lack of access to source of funding to start farming activities. It is a necessity to address the issues that are pushing young populations away from farming. Indeed, migration of young rural population not only contributes to the emerging phenomenon of over-urbanization and growing unemployment in urban areas but is also expected to affect global food production by depraving the agriculture system from skilled workers (FAO, 2014). Investing in young people living in rural areas is a key to enhancing agricultural productivity, boosting rural economies and ensuring food security.

Although young people are facing difficulties, we also need to look at young farmers as a source of hope for the future of sustainable agriculture. The new generation is now facing issues and challenges inherited from the past development choices, witnessing the strong effects of global warming and environmental degradation. Such worrying trends in environmental degradation and climate change, combined with a rising sensitization on the benefits of agroecology have resulted in the emergence of a large group of young agroecology promoters. Numerous young people in the Mekong region are leading innovative agriculture initiatives. By settling up organic farms, sometimes combined with ecotourism or organic restaurants, young farmers get economic benefits along with the satisfaction of producing safe food and supporting local biodiversity.

This pilot research aimed at shedding light on these emerging innovative organic farms led by young farmers. It relied on the development of a Sustainability Assessment Tool (combining and adapting different existing approaches) to gather information about the economic, social and environmental situation at farm’s level. All the information collected was then translated into a spider web representing the three dimensions of sustainability. 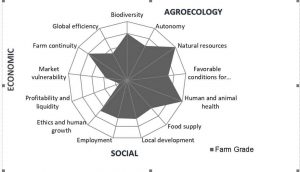 The spider web helps in visualizing the sustainability level reached by each farm and to identify potential improvements. The use of this assessment tool reflects an ambition to invest time and capacities into a network of sustainable farms set as outstanding example of success in the transition towards agroecology and ready to be change makers.

This pilot research led to the sustainability assessment of 18 farms across the Mekong region, all being led by young farmers aged under 40 years old. Some of the case studies highlighted great success in combining agriculture productivity and sustainability. Alongside with the assessment, short video testimonies of young farmers and practical examples of agroecological techniques were produced.

Cases studies of some of the farms assessed can be found hereafter:

All videos can be found on the dedicated playlist “Videos about Young farmers” on ALiSEA Youtube channel (https://bit.ly/2QYSZhF).

View all posts by Pierre Ferrand →
Subscribe to our Newsletter